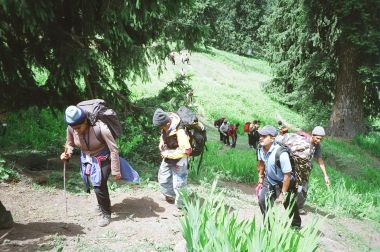 The Himalaya Range or the Himalaya for short, is a mountain range in Asia, separating the Indian subcontinent from the Tibetan Plateau.

Together, the Himalayan mountain system is the planet's highest, and home to the world's highest peaks, the Eight-thousands, which include Mount Everest and K2.
The main Himalaya range runs, west to east, from the Indus river valley to the Brahmaputra river valley, forming an arc 2,400 km (1,491 mi) long, which varies in width from 400 km (249 mi) in the western Kashmir-Xinjiang region to 150 km (93 mi) in the eastern Tibet-Arunachal Pradesh region.
The range consists of three coextensive sub-ranges, with the northern-most, and highest, known as the Great or Inner Himalayas.
Impact of climate:-
Pass in Ladakh with the typical Buddhist prayer flags and chorten. The Himalayas have a profound effect on the climate of the Indian subcontinent and the Tibetan plateau. The Himalayas, which are often called "The Roof of the World", contain the greatest area of glaciers and permafrost outside of the poles. Ten of Asia’s largest rivers flow from here, and more than a billion people’s livelihoods depend on them. To complicate matters, temperatures are rising more rapidly here than the global average. In Nepal, the temperature has risen 0.6 degree C over the last decade, whereas the global warming has been around 0.7 degree C over the last hundred years.