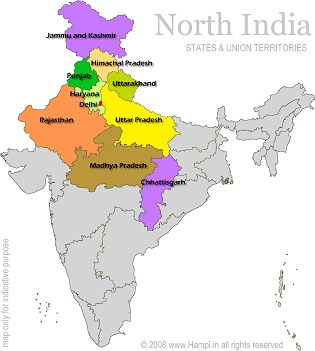 North India is loosely defined region in the northern part of India. The exact meaning of the term varies by usage. The dominant geographical features of North India are the   Indo-Gangetic Plain and the Himalayas, which demarcate the region   from Tibet and Central Asia. North India has been the historical center of the Maurya, Gupta, Maratha, Mughal and British Indian Empires. It has a diverse culture, and includes the Hindu pilgrimage centers of Char Dham, Haridwar and Varanasi, the Buddhist Mahabodhi Temple and the Muslim pilgrimage destination of Ajmer, as well as world heritage sites such as the Valley of flowers, Khajuraho, Bhimbetka Caves, Qutb Minar and the Taj Mahal.

General climate:- The Thar desert near Jaisalmer, RajasthanNorth India lies mainly in the north Temperate zone of the earth. Though cool or cold winters, hot summers and moderate monsoons are the general pattern, North India is one of the most climatically diverse regions on Earth. Extreme temperatures have ranged from −45 °C (−49 °F) in Dras, Jammu and Kashmir to 50.6 °C (123 °F) in Alwar, Rajasthan. Dras is the second coldest inhabited place on the planet.

Demographics:-
During the Scythian migrations around 100BC, a large part of North India was incorporated into the Scythian world.The people of North India are predominantly Indo-Aryan, and include various ethnic groups such as Brahmins, Jats, Rajputs, Gujjars, Ahirs, Khatris, Kambojs, Banias and Dalits. Over millennia, the region has experienced sustained incursions and immigration from the northwest, including the Indo-Scythians, Indo-Sassanids, Indo-Hephthalites,Kushans and Rohilla Pashtuns.

Hinduism, Islam and Sikhism are the dominant religions in North India. Other religions practiced by various ethnic communities include Jainism and Buddhism. The states of Uttarakhand, Rajasthan, Haryana, Madhya Pradesh, Chhattisgarh and Himachal Pradesh are overwhelmingly Hindu. Jammu and Kashmir is the only state in India with a majority Muslim population, while Punjab is the only state with a majority Sikh population. Uttar Pradesh, Bihar and Jharkhand are predominantly Hindu with other minorities.